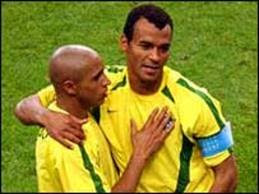 The occasion was Brazil's game against France in the World Cup quarterfinals. The Seleção line-up that day included right back--and captain--Cafu and left back Roberto Carlos. Roberto Carlos earned his first cap in 1992. He did not play in the 1994 World Cup, but won the 2002 World Cup with Brazil. Cafu, meanwhile, first played for Brazil in 1990 and was a member of both the 1994 and 2002 World Cup-winning sides. In 2006, they were part of a defense that had conceded only a single goal in the tournament up to that point, in a 4-1 group stage victory over Japan.

Unfortunately for Brazil, they conceded another goal--the only one of the match--against France. It came in the 57th minute as striker Thierry Henry connected with a Zinedine Zidane cross and slammed it into the roof of the net. France won 1-0 and Brazil were eliminated.

Afterward, both Cafu and Roberto Carlos drew criticism for the loss. Some commentators claimed that Cafu had passed his prime and should not have been included in the team for the tournament. Others blamed Roberto Carlos for failing to mark Henry on the goal. Both players then retired from the national team, though Cafu continued to play club ball until 2008. Roberto Carlos remains active and currently plays Russian Premier League club Anzhi Makhachkala.

The match was Cafu's 142nd for Brazil, making him their most-capped player. It was the 125th for Roberto Carlos, placing him in second. They are both well ahead of the closest active player, Lucio, who currently has 99.