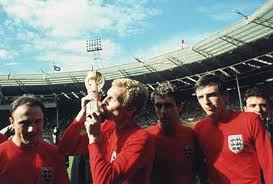 On 30 July 1966, England won the World Cup, beating West Germany 4-2 in extra time thanks in part to a controversial goal.

Played before a crowd of 98,000 at London's Wembley Stadium, the match featured an early exchange of goals from a pair of strikers, West Germany's Helmut Haller (12') and England's Geoff Hurst (18'). After that, though, the goals dried up. Although both sides playing aggressive attacking styles, goalkeepers Gordon Banks and Hans Tilkowski repeatedly denied chance after chance.

English midfielder Martin Peters finally beat Tilkowski to break the stalemate in the 78th minute and the hosts looked certain to win at the end of regulation. But in the 89th minute, a loose ball in the England box fell to center back Wolfgang Weber, who drove it home with a sliding shot to send the match into extra time.

There, England continued to press and were rewarded in the 101st minute when Hurst took the ball on the edge of the area and fired it over Tilkowski. The ball struck the crossbar and bounced straight down before a West German player headed it out of play. The referee blew the whistle and conferred with his linesman before awarding the goal. Replays remain inconclusive, but suggest that the entire ball had not crossed the line. In any event, Hurst completed his hat-trick in the 120th minute to seal the win.

Despite the eventual margin of victory, controversy continues to surround Hurst's second goal. In 1996, two engineers at Oxford University published a paper claiming that the entire ball had not crossed the line, missing by just 6 centimeters.