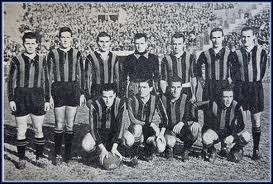 On 10 July 1949, Inter Milan opened their North American tour with an 8-2 win over the New York Stars at Randall's Island. It was the first of a six-match itinerary in the United States and Canada that ended with six Inter victories.

Led by captain Aldo Campatelli, Inter were coming off a second-place finish in the 1948-49 Serie A season, helped by the performances of István Nyers and Amedeo Amadei, who had finished as league's highest and second-highest scorers with 26 goals and 22 goals, respectively.

As evidenced by the eight goals they put past the New York Stars, Inter's offensive power proved too much for the North American teams, all of whom were all-star sides put together for the tour. The Italians followed that performance with five more victories; 12-4 over Kearny-Philadelphia, 5-0 over the American League Stars, 9-3 over the Montreal Stars, 5-1 over the U.S. Stars, and--in their closest match of the tour--4-2 over the Philadelphia Stars.

After returning to Italy, Inter recorded another second-place league finish in 1951, then won the league in 1953 and 1954. Soon afterward, manager Helenio Herrera arrived to usher the club into their Grande Inter phase, winning seven trophies between 1963 and 1966, including the 1964 and 1965 European Cups.
Posted by Brian Seal at 12:01 AM