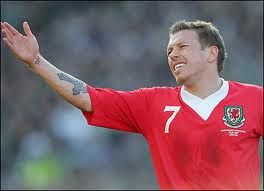 On 13 June 1979, future Wales captain and famously volatile striker Craig Bellamy was born in Cardiff. He has spent the majority of his career in England, with brief loan spells in Scotland and Wales.

Bellamy began his professional career in 1996 with Norwich City and established himself as a regular first-teamer by his second season. But after 32 goals in 84 league appearances, he drew substantial interest from other clubs, eventually moving to Coventry City in 2000 for a transfer fee of £6.5 million. Then, when Coventry were relegated at the end of his first season there, he moved on Newcastle.

He did well on the pitch at Newcastle, scoring 14 times in his first season, but he fell out with members of the coaching staff and several players, including his strike partner Alan Shearer. Manager Graeme Souness sent him out to Celtic on loan for the second half of the 2004-05 season. Afterward, he spent time with Blackburn Rovers (2005-06), Liverpool (2006-07), West Ham (2007-09), and Manchester City (2009-10) before moving to Cardiff City on loan in August 2010.

Along the way, Bellamy was accused of assault in four separate instances, though never convicted. Most recently, he was arrested in Cardiff in January 2011 for an alleged assault on two men.

Bellamy debuted for Wales in 1998 and rose to captain the team in 2006. To date, he has made 62 national team appearances and has scored 18 goals to place fifth on the list of the Wales national team's top scorers.