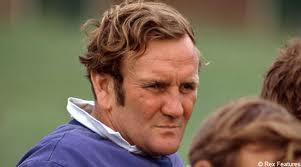 On 11 July 1977, Don Revie became the first manager to resign from the English national team. At the time, he had the worst winning percentage of any full-time England manager.

After winning his second league title in 1974, the Football Association picked him as the replacement for World Cup-winning boss Alf Ramsey (Joe Mercer served briefly as caretaker in the interim). But Revie was unable to repeat the success he had enjoyed at Leeds, as England missed out on qualification for the 1976 European Championship and the 1978 World Cup. In all, England claimed only fourteen wins in 29 matches during his tenure, for a winning percentage of 48.3%.

Revie's departure created a firestorm. He resigned to take charge of the United Arab Emirates national team for a reported 4-year contract worth £340,000. That was controversial enough, but rather than issue a statement through the FA, he sold the story to the Daily Mail. The FA responded by suspending him for 10 years for "bringing the game into disrepute," but Revie successfully overturned the ban in court.