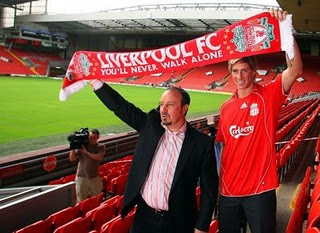 On 4 July 2007, striker Fernando Torres completed a move from Atlético Madrid to Liverpool, becoming the Anfield club's most expensive signing at the time.

Up to that point, Torres had spent his entire career with Atlético. From 2001 to 2007, he made a total of 249 appearances in all competitions, scoring 91 times. His most prolific season there was in 2003-04, when he scored 21 goals, 19 in the league. During that season, he also made his first appearance for Spain's senior side.

His scoring prowess drew the attention of Liverpool manager Rafa Benítez, who completed the signing in July 2007. Neither club announced the fee, but it is believed to have been close to £20 million, setting a new club transfer record. Torres proceeded to enjoy the best season of his career, scoring a total of 33 goals in all competitions as Liverpool finished fourth in the Premier League and reached the semifinals of the Champions League.

After three and a half seasons at Anfield, Torres moved to Chelsea for an undisclosed fee reported to have been approximately £50 million. The move opened the door for Liverpool to break their transfer fee record on successive days with the signing of strikers Luis Suárez (£22.8 million on 30 January 2011) and Andy Carroll (£35 million on 31 January 2011).