17 July 1994 - Nobody Remembers That Two Other Players Missed, Too 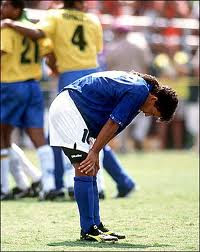 On 17 July 1994, Italy lost the World Cup Final in a penalty shootout to Brazil when their top scorer of the tournament, Roberto Baggio, sent his attempt over the bar.

Simply making it to the Final was a minor miracle for Italy, who opened their tournament campaign with a first-round loss to Ireland. And, as the fourth-best third place team in the group stages, they were the last team to qualify for the knockout rounds. Baggio, who had won the 1993 Ballon d'Or and FIFA World Player of the Year award for his UEFA Cup-winning season with Juventus, shined in the later rounds, scoring five goals--three of them match-winners (against Nigeria, Spain, and Bulgaria)--to take Italy to the final.

Baggio's scoring streak dried up in the final, as it did for Brazil's top scorer Romário (who was also on five goals for the tournament). With the match scoreless at the end of extra time, the teams went into penalty kicks to decide the winner. After four kicks each, Brazil were up 3-2 when Baggio stepped up to the spot.

It was his second penalty attempt of the tournament, as his match-winner against Nigeria had come from the spot in the 102nd minute. But this time, he fired the ball over the bar to end the match and give the trophy to Brazil.

He returned to the World Cup with Italy in 1998 to become the only Italian player to score in three different World Cups and his total of nine World Cup goals remains an Italian record.