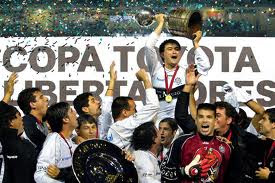 On 31 July 2002, Olimpia overturned a first-leg deficit against São Caetano to win their third Copa Libertadores on penalty kicks.

São Caetano, only two seasons removed from the Brazilian second division, had shocked Olimpia by winning 0-1 in the first leg, played in Ascunción the week before, with the lone goal coming from midfielder Ailton Delfino in the 61st minute. Hosting the second leg in São Paulo, they compounded the shock by again going up 1-0 with another goal from Delfino in the 31st minute.

But, this time, the Paraguayan side fought back. In the 59th minute, midfielder Gastón Córdoba drove a shot across the face of the goal and into the far corner. Then, ten minutes later, forward Richard Báez evened things up with a looping header. The teams remained level for the remainder of the match to force a decision by shootout.

Penalties were familiar to both teams in the tournament, as São Caetano needed them to get past Católica in the Round of 16 and Peñarol in the quarterfinals, while Olimpia used them to advance over Grêmio in the semifinals.

In the final, São Caetano started the shooutout and, after two kicks each, the teams were even at 2-2. But then both midfielder Marlon da Silva and defender Serginho sent their kicks for São Caetano over the bar. With Olimpia then leading 2-3, forward Mauro Caballero blasted his shot right down the middle, beating goalkeeper Silvio Luiz for the win.