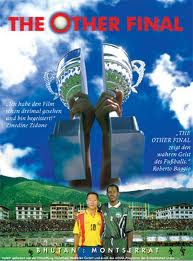 On 30 June 2002, while Germany and Brazil met in the World Cup Final, Montserrat and Bhutan faced off to determine which one of them was the worst team in the world.

The match, a friendly, was the idea of Dutch filmmaker Johan Kramer. When the Netherlands failed to qualify for the 2002 World Cup, he decided to make a movie about the world's two worst teams. He chose Montserrat and Bhutan, who, at the time, were the two lowest-placed teams in the FIFA world rankings.