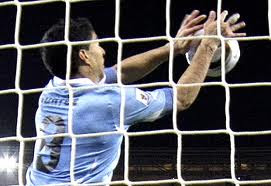 On 2 July 2010, Uruguay's Luis Suárez saved his team from World Cup elimination with a deliberate handball. Uruguay went on the win the match before getting knocked out in the semi-finals and finishing fourth, their best showing in the tournament since their previous fourth-place finish in 1970.

The handball came in the last minute of extra time in Uruguay's quarterfinal match against Ghana. The teams were level at 1-1, having traded goals from Sulley Muntari (45'+2) and Diego Forlán (55'). Right before time expired, there was scramble in front of Uruguay's goal. The ball fell to Ghana striker Dominic Adiyiah, who headed it toward the net. It would have gone in had Suárez not--very visibly--swatted it away with his hands.

The referee saw the deliberate handball and awarded Ghana a penalty kick while ejecting Suárez from the match. As Suárez marched down the tunnel, Ghana striker Asamoah Gyan fired the ball off the bar and out of bounds. The whistle blew seconds later to send the match into a penalty shootout which Uruguay won, 4-2.

Uruguay advanced to the semifinals, where they lost to the Netherlands, then lost to Germany in the third-place match. Suárez, meanwhile, made a high-profile move that summer from Ajax to Liverpool and established himself as one of the Premier League's newest stars. Although he drew heavy criticism for his handball, he showed no remorse, saying after the match that "The Hand of God belongs to me now."