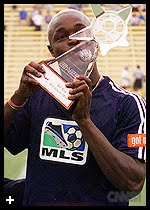 On 29 July 2000, the Columbus Crew hosted the highest-scoring MLS All-Star game ever, as East beat West 9-4 with goals from eight different players.

The 2000 edition was the fifth MLS All-Star Game and the fourth to feature East versus West (the 1998 game pit US all-stars against world all-stars). And the East had enjoyed more success, winning three matches to the West's one. 2000 provided more of the same.

Played before a sellout crowd of almost 24,000 at Columbus Crew Stadium, the East wasted no time, setting the pace with a 2nd-minute goal from MetroStar forward Clint Mathis. But the West scored a quick flurry of goals from Chicago Fire striker Ante Razov (17', 22') and Los Angeles Galaxy midfielder Mauricio Cienfuegos (19') to take a 3-1 lead. By the break, the East had narrowed the gap, but the West still led, 4-3.

The second half belonged to the East, who received goals in the 51st, 59th, 61st, 65th, 67th, and 76th minutes to claim their fourth win over the West in convincing fashion. Tampa Bay Mutiny star Mamadou Diallo (pictured) claimed Man of the Match honors with two goals and an assist. A full list of the scorers is below.