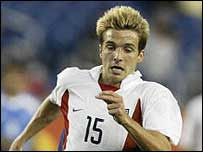 On 26 July 2003, winger Bobby Convey scored his first and only international goal to lift the United States over Costa Rica in the CONCACAF Gold Cup's third-place match.

Although he was only 20 years old at the time, Convey had already developed a resume full of potential. He joined DC United in 2000, making him the youngest signing in MLS, then earned his first full international cap that same year. By the time he played against Costa Rica in the Gold Cup, he was captain of the U20s and had played in all but one of the senior side's matches that year.

The US had advanced to the semifinals in the tournament, but lost to Brazil 2-1 in extra time. That put them into the third-place match against Costa Rica, who had been eliminated by Mexico. Playing at the Orange Bowl in Miami, Costa Rica took a 2-1 first-half lead with a brace from striker Rolando Fonseca (24', 39') sandwiched around a goal from US defender Carlos Bocanegra (29').

But the Yanks rallied in the second half, drawing level with a 56th-minute strike from midfielder Earnie Stewart, then taking the lead 11 minutes later. The match-winner started with Landon Donovan, who split the defense with a perfect ball. Convey latched on to it and fired it home with a left-footed blast from the edge of the penalty area.