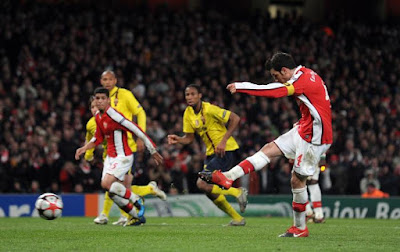 On 31 March 2010, Arsenal captain Cesc Fàbregas scored the equalizing goal against Barcelona in the Champions League quarterfinal. And he did it with a broken leg.Fàbregas, who joined Arsenal in 2003 after five years at Barcelona's youth academy, had been the subject of longstanding transfer rumors linking him with a return to his former club, adding a lot of spice to the match-up. Barcelona, as the reigning champions, were heavy favorites, but the Gunners managed to hold them to a scoreless draw until the break. Less than one minute after the restart, however, a long pass went over the Arsenal backline to a racing Zlatan Ibrahimović, who beat keeper Manuel Almunia with a lobbed ball to the far post. He then doubled the lead in the 59th minute, after another overhead ball left him one-on-one with Almunia. But Arsenal midfielder Theo Walcott narrowed the gap ten minutes later with a precise finish. As Arsenal pushed forward for an equalizer, Barça's Carles Puyol fouled Fàbregas in the box in the 85th minute. Fàbregas stepped up to the spot and converted the ensuing penalty, then immediately afterward started limping. It appeared that he pulled a muscle, but scans later revealed that Puyol's foul had resulted in a small fracture in his right fibula. The injury forced Fàbregas to miss the return leg, which Barcelona won 4-1. He remained with Arsenal for one more season, then transferred to Barça in August 2011 for £29 million. He left Barcelona in 2014 for Chelsea, his current club. 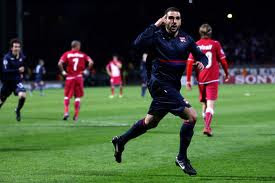 On 30 March 2010, Lyon and Bordeaux met for the first all-French contest in the Champions League, with Lyon emerging as 3-1 winners.Bordeaux, the reigning Ligue 1 champions, were again at the top of the table, four spots above Lyon, and had beaten them in the league back in December. The Girondins had also gotten off to a flying start in the Champions League, winning six of their first seven matches to reach the quarterfinals (the other was a 1-1 draw with Juventus in the group stage). There, they met Lyon, who had just eliminated Real Madrid in the Round of 16.The teams' meeting at Lyon's Stade Gerland was a first, as French teams had met five times previously in UEFA competitions, but never before in the Champions League. Lyon marked the occasion by taking a 10th-minute lead with a goal from striker Lisandro López (pictured). Not to be outdone, Bordeaux forward Marouane Chamakh drew the visitors level four minutes later.Lyon regained the lead in the 32nd minute with a goal from Michel Bastos, then sealed the win with a 77th-minute penalty kick from López. That final goal proved to be crucial, as Bordeaux won the second leg 1-0, but lost 3-2 on aggregate. 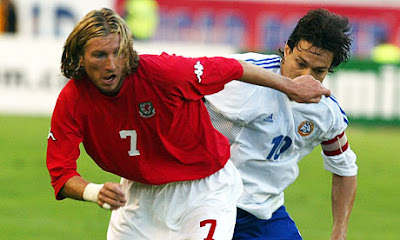 On 29 March 2000, Wales played their first match at the new Millenium Stadium in Cardiff. And lost 1-2.

Built on the site of the old national ground, Cardiff Arms Park, construction on the stadium finished in the summer of 1999 at a total cost of £121 million. The Welsh rugby team hosted the first major event there, beating South Africa in a friendly.

The football team's turn came the following spring, as they hosted Finland in a friendly of their own. A crowd of 65,000 showed up for the event, setting a new national team record (though it has since been broken). Unfortunately for the home fans, however, Finnish midfielder Jari Litmanen (pictured, battling Wales' Robbie Savage) scored the opening goal in the 21st minute. Welsh striker Nathan Blake found the back of the net in the 42nd minute, but it was the wrong net, putting the Finns up 0-2.

Ryan Giggs pulled one back in the 60th minute, but that was the last goal of the day and Finland left as 1-2 winners.

On 25 March 1914, Aris FC, owners of an impressive home unbeaten streak in UEFA competition, formed in Thessaloniki, Greece.Taking their name from the Greek god of war, they helped found the regional Macedonian Football Clubs Association in 1923 and went on to win that league's inaugural title in 1924. For the 1927-28 season, the regional Greek leagues started an official Panhellenic Championship (replacing an earlier unofficial tournament), with Aris emerging as the first winners.They repeated as national champions in 1932 and 1946 and also won another thirteen regional titles up through 1959. They have not seen as much success since, however, with their only other major honor coming in 1970 when they won the Greek Cup over local rivals PAOK.Despite the lack of silverware, however, Aris have regularly qualified for European competition, leading to their remarkable performance at their Kleanthis Vikelidis Stadium. After losing to Ujpest there in the 1968 Inter-Cities Fairs Cup, Aris have gone unbeaten in 26 consecutive home games in the Inter-Cities Fairs Cup, the Cup-Winners' Cup, the UEFA Cup, and the Europa League.That run includes wins over Benfica, Red Star Belgrade, and Atletico Madrid, as well as draws with Chelsea, Roma, and Bayer Leverkusen. The most recent match in the streak was a scoreless Europa League draw with Manchester City in 2011 (though Aris lost the away leg 3-0). 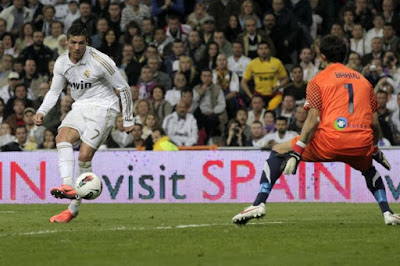 On 24 March 2012, Real Madrid's Cristiano Ronaldo scored his 100th La Liga goal, hitting that milestone faster than any other player in club history.Ronaldo was in his third La Liga season, having joined Real Madrid from Manchester United in a July 2009 deal worth £80 million. He scored 26 league goals that first season, then 40 in the next. Despite that prolific output, however, Real Madrid finished as runners-up to Barcelona both seasons.He got off to another productive start in 2011-12, with 33 goals in Madrid's first twenty-eight league games to bring his overall tally to 99 while the club secured their spot at the top of the table.For their next match, Madrid hosted Real Sociedad at the Bernabéu and took the lead with a sixth-minute goal from striker Gonzalo Higuaín. Then in the 32nd minute, Ronaldo received the ball on the left and raced past the defense, squared up against the keeper, and sent a right-footed shot just inside the far post.It his 100th La Liga goal in just his 92nd game, beating the previous club record of Ferenc Puskás, who needed 105 games to get to that mark. But it fell just short of the overall record, set by Real Oviedo's Isidro Lángara, who did it in 90 games.Ronaldo went on to score a second as Madrid won 5-1, then proceeded to take the league title. 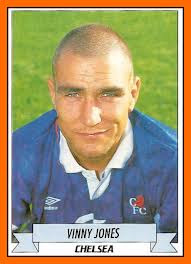 On 21 March 1992, Chelsea midfielder Vinnie Jones set an English football record by getting a yellow card after only three seconds against Sheffield United.Jones had previously established a reputation for aggressive play and a casual attitude toward the rules of the game, most notably during a three-year spell with Wimbledon's FA Cup-winning "Crazy Gang." But he left there in 1989 and spent a season with Leeds where his disciplinary record improved--he got only three yellows all season long.In 1990, he moved to Sheffield United, then moved again a year later, joining Chelsea in 1991. While there, he continued to toe the line, but slipped up in a home match against his former club, Sheffield United, to earn the record-setting caution. To make matters worse, United went on to win, 1-2.Jones returned to Wimbledon, playing there from 1992 to 1998, then retired in 1999 after a season with Queens Park Rangers. Afterward, he took up acting, usually in roles complemented by his playing reputation. 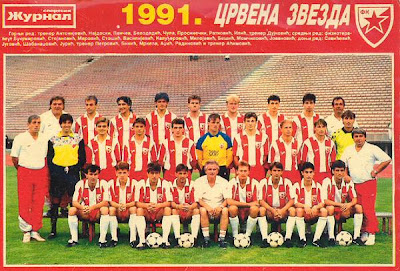 On 20 March 1991, a European Cup quarterfinal between Red Star Belgrade and Dynamo Dresden was halted in the 75th minute due to rioting in the stands. It never resumed and went into the books as a 3-0 win for Red Star.Red Star won the first leg 3-0 in Belgrade two weeks earlier, so Dresden went into the second leg with a difficult task ahead of them. But they got a lift when the referee awarded them a handball penalty in the third minute, which striker Torsten Gütschow duly converted.The two sides exchanged several chances in the remainder of the first half, with Red Star getting the better looks. Only outstanding play from Dresden goalkeeper Thomas Köhler kept the hosts ahead at the break. Red Star finally scored in the second half, with winger Dejan Savićević evading four defenders and firing past a fifth from close range to draw the visitors level in the 51st minute.Twenty minutes later, they took the lead with a strike from forward Darko Pančev, who fired the ball between Köhler's legs and into the far corner of the net. That was too much for the home supporters--when the referee awarded Red Star a corner kick shortly afterward, the Dresden fans began hurling objects at both the Red Star kicker and the assistant referee.After a few futile attempts to calm the fans, referee Emilio Soriano Aladrén ordered the teams off the pitch and canceled the remainder of the game. Although Red Star were leading 2-1 at the time, UEFA later awarded them a 3-0 victory and banned Dresden from UEFA competitions for the following season.Red Star went on to beat Bayern Munich in the semifinals and then took the trophy with a win over Marseille on penalties in the final.