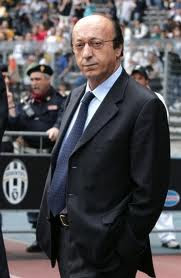 On 14 July 2006, an Italian football federation panel announced the punishments for the Calciopoli match-fixing scandal, including relegations for Juventus, Fiorentina, and Lazio.

The announcement was the result of a police investigation into the 2005-06 Serie A season that found all three clubs, plus AC Milan, guilty of fixing matches by bribing referees. The prosecution requested relegations and points deductions for each club, reserving the harshest penalties for Juventus. The Turin club's general manager, Luciano Moggi (pictured), was a central figure in the collusion, which resulted in Juventus winning the Scudetto for 2005-06.

Although the prosecutors requested that Juventus be demoted at least two levels, the panel's sanction dropped them only to Serie B. They also stripped Juventus' 2005 and 2006 league titles and docked them 30 points for the upcoming season. Fiorentina and Lazio were relegated as well, while Milan escaped with a relatively minor points deduction. The Juventus board resigned en masse, while Moggi received a lifetime ban.

After the appeals process, the punishments were reduced. Juventus ended up as the only club relegated--for the first time in club history. The points deduction was lowered from 30 to 9, however, and they won promotion back to Serie A for the 2007-08 season.
Posted by Brian Seal at 12:01 AM