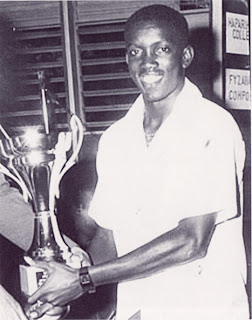 On 9 July 1989, Trinidad and Tobago won the inaugural Caribbean Cup, beating Grenada 2-1 with a brace from 17-year old striker Dwight Yorke, making his first appearance for the Soca Warriors.

Six teams qualified for the tournament and were split into three groups, with the two group winners paying for the title. In Group A, all three teams finished on two points with a win and a loss each. Trinidad and Tobago and Guadeloupe both had the same goal differential (+1), but T&T claimed the top spot by virtue of having scored three goals to Guadeloupe's two (hosts Barbados were at the bottom thanks to a goal differential of -2).

The winner of Group B was more straightforward, as Grenada managed a win and a draw to finish with 3 points, ahead of the Netherlands Antilles (2 points) and St. Vincent and the Grenadines (1 point).

The teams met in Bridgetown, Barbados for the final, where Trinidad & Tobago took a first-half lead with a 24th-minute goal from Yorke (pictured, holding that year's T&T Secondary Schools Football League trophy). They held onto the lead for most of the match, but Grenada's Wayne Hood equalized in the 84th minute. Yorke then provided the match-winner five minutes later. It was the first of their record eight titles.