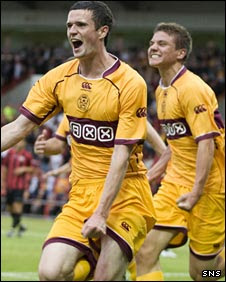 On 23 July 2009, Motherwell overcame a first-leg deficit to advance out of the Europa League second qualifying round by beating Albania's Flamurtari Vlorë by the commanding score of 8-1.

It was the second straight appearance in the tournament for Motherwell, who entered the competition in the first round the previous year, but failed to score a single goal and were promptly eliminated by AS Nancy. For the 2009-10 edition, they entered in the first qualifying round where they beat Llanelli (3-1 on aggregate). That win sent them into the second qualifying round to face Flamurtari Vlorë.

The Albanians hosted the first leg, winning 1-0. But the second leg was a completely different story. Played at Excelsior Stadium in Airdrie because Motherwell's Fir Park ground was closed for summer repairs, the hosts were up 6-0 before the break, including a hat-trick from striker Jamie Murphy (pictured) (16', 19, 34'). The scoreline could have been worse, as Motherwell missed a slew of chances, but by the time Flamurtari got on the scoresheet in the 65th minute, the Scots were up 7-0. Then striker Robert McHugh added another in the 72nd minute to cap the victory.

Unfortunately for Motherwell, they went out in the third qualifying round after losing to Steaua Bucureşti, 6-1 on aggregate, but the 8-1 result against Flamurtari remains their biggest margin of victory in European competition.
Posted by Brian Seal at 12:01 AM