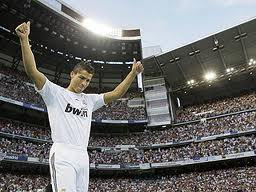 On 6 July 2009, over 80,000 people gathered at the Bernabéu to meet Real Madrid's newest star, Portuguese winger Cristiano Ronaldo. The event was the culmination of an effort that took over two years and £80 million to complete.

Rumors of Real Madrid's interest in Ronaldo surfaced in March 2007, but Manchester United were unwilling to part with him and signed him to a five-year extension worth £31 million. But while winning the Premier League with United in 2007, 2008, and 2009, as well as the 2008 Champions League, the winger began to reciprocate the interest from the Spaniards. And on 11 June 2009, the two clubs reached a deal. Real Madrid paid an £80 million transfer fee to United, while Ronaldo received a 6-year deal worth €11 million per year. The signing was part of a second Galácticos wave that included Kaká, Karim Benzema, and Xabi Alonso.

To welcome Ronaldo to Madrid, the club hosted a presentation at the Bernabéu. 80,000 people showed up to watch Real Madrid president Florentino Pérez hand Ronaldo the number 9 shirt that had once been worn by club legends Hugo Sanchez, Ronaldo, and Alfredo di Stéfano.

Ronaldo went on to score 33 goals in his first season and 53 the next season, though Real Madrid finished second in the league to Barcelona both times.