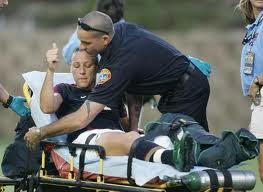 On 16 July 2008, the United States women beat Brazil in a pre-Olympics friendly, but lost Abby Wambach, their leading scorer, who suffered a broken leg.

Played before a sold-out crowd of 7,502 at San Diego's Torero Stadium, the match was the second contest between the two teams in four days and the last for both teams before they headed to China for the Olympics. The US had won the earlier match 1-0 and were hoping for a repeat performance.

Those hopes took a blow in the 31st minute when Wambach--the leading scorer for the US that year with 13 goals and 99 goals in her international career--collided with Brazilian defender Andreia Rosa and immediately waved for the medical staff. She was taken straight to the hospital where x-rays confirmed fractures in her tibia and fibula. Despite the loss of Wambach, the Americans continued to press Brazil and were rewarded with an 85th-minute goal from substitute Natasha Kai for the 1-0 win.

Brazil and the US met again in the gold medal match in Beijing where the US won again by the score of 1-0. Wambach missed the tournament, but returned to the US team in May 2009 and scored her 100th goal in July of that year. Her tally currently stands at 121 after scoring critical goals against Brazil and France in the knockout stages of the 2011 Women's World Cup.