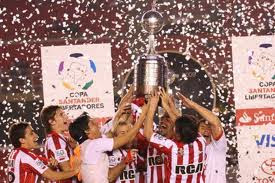 On 15 July 2009, Estudiantes won the Copa Libertadores, beating Cruzeiro over two legs. The title was their fourth, coming 39 years after their third.

The two teams met at the start of the 2009 tournament in the group stage. They split their two meetings, with Cruzeiro winning the first 3-0, then Estudiantes winning the second 4-0. The Brazilians went on to top the group, with Estudiantes close behind in second place.

Estudiantes hosted the first leg of the final on 8 July, resulting in a scoreless draw. For the second leg, they played at the Mineirão in Belo Horizonte before a crowd of 65,000. The first half was another close--and physical--contest, as the teams again failed to score while accumulating a total of three yellow cards (one for Cruzeiro and two for Estudiantes). Cruzeiro took a second-half lead with a 52nd-minute goal from midfielder Henrique, but Estudiantes quickly equalized when forward Gastón Fernández found the net five minutes later.

The visitors started to dominate the midfield, with Juan Sebastián Verón orchestrating the attack. It paid off in the 72nd minute, as Estudiantes forward Mauro Boselli provided the winning score. Verón was named man of the match for his efforts.

The win placed Estudiantes fourth in the list of most Cope Libertadores titles, behind fellow Argentinian clubs Independiente (7) and Boca Juniors (6), as well as Uruguayan club Peñarol (5).