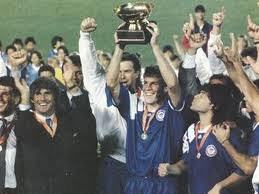 Played in the Californian cities of Pasadena and Los Angeles, the 1991 Gold Cup included eight teams from North and Central America. As hosts, the US qualified automatically, while Honduras earned their place as runners-up to Costa Rica in the Central American qualifying tournament, the UNCAF Nations Cup.

The teams were split into two groups of four. In Group A, Honduras dropped only a single point thanks to a 1-1 draw with Mexico, but topped the group on goal differential. They then advanced to the final with a win over Costa Rica. Meanwhile, the US won Group B with victories in all three matches, then beat Mexico 2-0 in the semifinal.

The final was played before a crowd of 39,873 at Memorial Coliseum in Los Angeles. There, the two teams battled to a scoreless stalemate at the end of extra time to send the match into a penalty shootout. Honduras went into the shootout with their reserve goalkeeper, Wilmer Cruz, who had replaced their starting keeper, Belarmino Rivera, in the 119th minute.

After five kicks each, the teams were level at 2-2, so they moved into sudden death. After seven kicks each, they were still level, with each side having made one and missed one of their intervening kicks. US defender Fernando Clavijo then converted the next attempt--the Americans' eighth--to take the lead. Juan Carlos Espinoza stepped up for Honduras, but rifled his shot over the bar as the US claimed the victory.

It was the first major trophy for the US, who have since won the tournament a total of four times. Honduras, who won the CONCACAF Championship in 1981, have yet to return to the Gold Cup Final.
Posted by Brian Seal at 12:01 AM