25 July 2009 - There Was Something In The Air That Night, Apparently 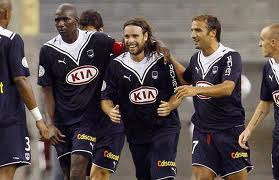 On 25 July 2009, Bordeaux won the Trophée des Champions by beating Guingamp 2-0, with both goals scored by players named Fernando.

The tournament, which started in 1995 but traces its roots back to 1949, pits the previous season's Ligue 1 champions against the reigning Coupe de France holders. The league champions were Bordeaux, who had also won the Coupe de la Ligue that season. They were up against Ligue 2 side Guingamp, who had defied the odds by defeating several Ligue 1 clubs, including Rennes, Toulouse, and Le Mans, on their way to the Coupe de France title, despite finishing in the bottom half of Ligue 2 that year.

For the first time, the match was played outside of France. In order to promote French football overseas, the teams met at the Olympic Stadium in Montreal, where a crowd of over 34,000 turned out to watch.

Bordeaux took a first-half lead with a goal from forward Fernando Cavenaghi (pictured, center) in the 39th minute. Guingamp's tight defense managed to keep the margin close, but midfielder Fernando Menegazzo, who had come on as a second-half substitute, scored in the 90th minute to seal the victory. It was Bordeaux's second consecutive Trophée des Champions and their third overall.