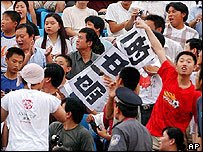 On 7 August 2004, Japan defeated China 3-1 in the Asian Cup Final before a crowd of 62,000 at Workers Stadium in Beijing, sparking a riot among Chinese supporters.


The tournament was shrouded in anti-Japanese sentiment, as many Chinese attendees, still angry over Japan's treatment of China during World War II, harrassed the Japanese side, booing anytime they took possession of the ball, displaying political banners denouncing Japan, and drowning out the Japanese national anthem.


Prior to the Final, authorities from both nations expressed concerns about the growing tension. Chinese officials increased the police presence for the match, while the Japanese embassy in Beijing cautioned fans of its national team to avoid drawing attention to themselves. According to the BBC, "tens of thousands" of Chinese supporters were in the stands for the match to watch China's first Asian Cup Final in 20 years.


The match itself was free from violence. The teams were level 1-1 at the half, but Japan went ahead in the 66th minute with a controversial goal from defender Koji Nakata. Replays showed that Nakata's scoring strike went in off of his hand, but the goal was allowed. In any event, Japanese striker Keiji Tamada added an insurance goal in the 91st minute to seal the win.


After the match, the Japanese supporters were driven to safety while Chinese fans started to riot. They burned Japanese flags and sang political songs. Several fights broke out and many bystanders were injured, including a couple of photographers who were beaten by the police.