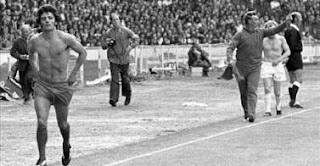 On 10 August 1974, Liverpool defeated Leeds United on penalties, 1-1 (6-5), to claim the FA Charity Shield before a crowd of 67,000 at London's Wembley Stadium. It was the first Charity Shield match to be shown live on television and it was one that most spectators would not forget.

The day was significant for both managers, as it was Bill Shankly's last match in charge of Liverpool and Brian Clough's first in charge of Leeds United. Prior to his appointment at Elland Road, Clough had been fiercely critical of Leeds and his predecessor Don Revie for playing what Clough called "dirty football." Unfortunately for Clough, the match was overshadowed by the very tactics he had criticized.

Early in the match, Leeds midfielder Johhny Giles earned a quick booking for lashing out at a Liverpool player. The situation grew worse as Leeds midfielder and captain Billy Bremner repeatedly knocked into Liverpool forward Kevin Keegan. Keegan grew increasingly frustrated, both with Bremner and with the referee for allowing Bremner's behavior to continue. The situation escalated to the point where a scuffle broke out between Keegan and Bremner and both were ejected. On their way off the pitch, both players insulted their teams and supporters by stripping off their shirts and throwing them to the ground.

Although both players were ejected, Clough was certain his own player was to blame and was quoted afterward as saying "Billy Bremner's behaviour was scandalous, producing one of the most notorious incidents in Wembley history. It was as if the players were offering grounds for all my criticism that they had resented so much."

The FA fined Keegan and Bremner £500 each. Keegan was also suspended for three matches, while Bremner was suspended for eight. By the time Bremner's suspension ended, Clough had departed from Elland Road, having been sacked after 44 days in charge.
Posted by Brian Seal at 12:01 AM