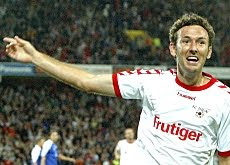 On 23 August 2005, Swiss side FC Thun beat Malmö 3-0 at Thun's Stadion Lachen. The match was the second leg of the third qualifying round for the 2005-06 UEFA Champions League.

Thun had won the first leg in Sweden on 10 August, 0-1, and needed only a draw to advance. Rather than sit back and defend, however, Thun attacked the Swedish side and claimed an early lead with a 25th-minute goal from Brazilian center back Tiago Bernardi (pictured). Forward Mauro Lustrinelli, a Swiss international, added a brace (40', 65') to complete the rout and put Thun into the group stages.

Thun's qualification was particularly impressive given the club's small stature. They had only recently been promoted to the Swiss top flight in 2002 and, at the time of their qualification, had an annual budget of only €2 million. They were thus the smallest club ever to qualify for the Champions League.

Unfortunately, their success ended in the group stages. Drawn against Arsenal, Ajax, and Sparta Prague, Thun managed one win, one draw, and four losses, to finish third in the group. That finish sent them out of the Champions League, but into the Round of 32 for the 2005-06 UEFA Cup where they lost to Hamburg 1-2 on aggregate.

In 2008, Thun were relegated to Switzerland's second tier, the Swiss Challenge League, where they currently compete.
Posted by Brian Seal at 12:01 AM