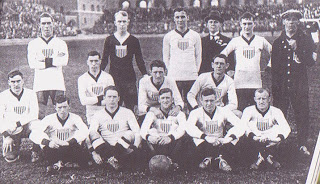 The United States had earlier played a couple of unofficial matches against Canada, first losing 0-1 in 1885, then winning 1-0 in 1886, both in Newark, New Jersey. The match against Sweden, however, was the first since the founding of the United States Soccer Federation in 1913.

Approximately 21,000 people watched the match, including Sweden's King Gustav V. US captain Thomas Swords scored the opening goal in the first half, with Charles Ellis adding another in the second half to put the Americans up 2-0. Sweden then pulled one back, but Harry Cooper netted a third for the US. Five minutes from time, Sweden added a second to end the match 2-3 in favor of the visiting American side.