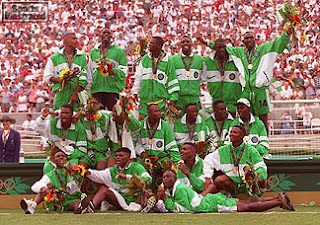 On 3 August 1996, Nigeria beat Argentina 3-2 in the gold medal match of the Summer Olympics before a crowd of 86,117 in Athens, Georgia's Sanford Stadium.

The Nigerian side, nicknamed the Super Eagles, had impressed during their first World Cup appearance two years earler, when they won their group, then lost in the first knockout round to eventual runners-up Italy in extra time. They had also won the African Cup of Nations in 1994.
In the 1996 Olympics, they finished the group stage even on points with Brazil and Japan, with two wins and one loss each, but finished in second position on goal differential (Brazil finished first). They then defeated Mexico 2-0 in the quarterfinals before beating Brazil 4-3 in the semifinals with a dramatic come-from-behind victory. With Brazil up 3-2, striker Nwankwo Kanu scored a 90th minute equalizer to force extra time, then won the game with a golden goal in the 94th minute.
Nigeria received more last-minute heroics in the Final. After giving up a 3rd-minute goal, then twice drawing level, the match was tied at 2-2 in the 90th minute when midfielder Emmanuel Amuneke received the ball about 10 yards out from the Argentine goal and sent a soft looping shot over the head of keeper Pablo Cavallero for the win.