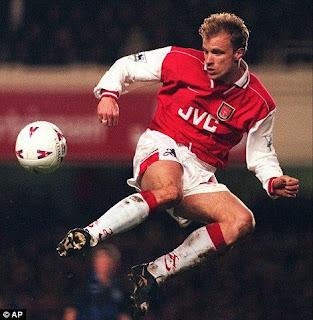 On 19 August 1995, striker Dennis Bergkamp debuted for Arsenal in a 1-1 home draw against Middlesbrough.

Arsenal manager Bruce Rioch lured the Dutch international away from Inter, who had signed him from Ajax in 1993 for a transfer fee of £12 million, making him the second-most expensive footballer in the world at that time. His two seasons in Italy were unsuccessful, however, and Arsenal was able to purchase him for the relative bargain of £7.5 million.
A three-time Eredivisie top scorer during his time with Ajax, Bergkamp did not score for the Gunners until his seventh match, a 4-2 home win over Southampton on 23 September 1995. He quickly resumed his former proficiency in front of the goal, however, and notched 120 goals in 411 appearances for Arsenal before retiring after the 2005-06 season.
He earned a number of personal honors while playing for the North London side, including the English PFA Player of the Year award in 1998, a third-place finish in FIFA Player of the Year voting (1997), and two Premier League Goal of the Season awards (1998, 2002).
Posted by Brian Seal at 12:01 AM