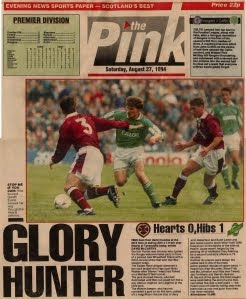 On 27 August 1994, Hibernian defeated rivals Hearts 0-1 before a crowd of 13,500 at Tynecastle. The win ended Hibs' streak of 22 Edinburgh derbies without a victory--a streak that stretched back for five and a half years.

It was only the third match of the season, but Hibs were flying high in second place in the table after a 5-0 win over Dundee United and a goalless draw with Kilmarnock. Hearts, on the other hand, were sitting in eighth position (out of ten), with a 1-3 loss at Aberdeen and a 1-1 draw at Motherwell. The Jambos were nonetheless optimistic, counting on their recent form over Hibs to continue.

That optimism lasted until the 62nd minute, when Hibs defender and captain Gordon Hunter sent a 10-yard shot past Hearts keeper Nicky Walker. Hearts were unable to return the favor, as Hibs keeper Jim Leighton proved too resolute in goal and held on for his third consecutive clean sheet.

The match was not without controversy, as Hearts midfielder Gary Mackay was sent off in the 74th minute after receiving his second booking and six other players--three from each side--received yellow cards.

Hibs didn't have to wait another five and a half years for their next derby win--they defeated Hearts in their very next meeting, a 2-1 win at Easter Road on 29 October 1994.