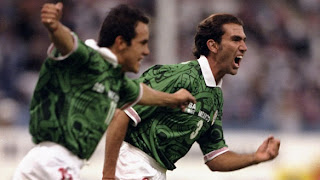 On 4 August 1999, host nation Mexico beat Brazil 4-3 in the Confederations Cup Final before a crowd of 110,000 at Mexico City's Estadio Azteca. The tournament was the fourth Confederations Cup, which typically includes the winners of the six FIFA confederations (CAF, CONMEBOL, UEFA, AFC, OFC, and CONCACAF) as well as the World Cup holders and the host country.

The Final featured a showdown between the tournament's two best players—Brazilian midfielder Ronaldinho and Mexican midfielder Cuauhtémoc Blanco. Ronaldinho had scored in every match for Brazil, including a 13th-minute gamewinner in their 1-0 win over the United States in the group stage and a hat-trick in their 8-2 demolition of Saudi Arabia in the semi-finals. Similarly, Blanco netted four in Mexico's opening match against Saudi Arabia and scored the 97th-minute golden goal in Mexico's 1-0 win over the United States in the semi-finals.

In the Final, Mexico took a 2-0 lead in the first half with goals from midfielder Miguel Zepeda (13') and striker José Manuel Abundis (28'). Brazil pulled one back just before the break when left winger Serginho converted a 43rd-minute penalty kick. Striker Roni then equalized in the 47th minute, but the game did not remain level for long, as Zepeda scored his second in the 51st minute. Blanco added another eleven minutes later, to recapture Mexico's 2-goal lead. It turned out to be the matchwinner, as Brazilian midfielder Zé Roberto completed the scoring with a goal in the 63rd minute.

Blanco and Ronaldinho tied with Saudi Arabia's Marzouq Al-Otaibi for most goals of the tournament at 6 each. And while Blanco helped his team to the title, Ronaldinho earned the Golden Ball as the tournament's best player.