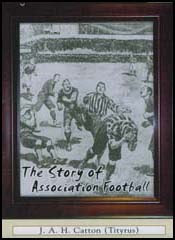 On 21 August 1936, football reporter and author J.A.H. Catton died at the age of 76. He was widely regarded as the greatest sports writer of his day and is considered the father of modern football journalism.

In 1926, Catton published a book, The Story of Association Football, which further helped publicize the increasingly-popular sport.

By the time of his death in 1936, newspapers in Britain devoted substantial coverage to football, due in significant part to his efforts.
Posted by Brian Seal at 12:01 AM