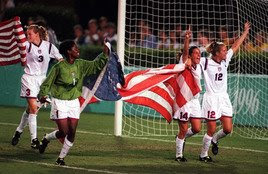 On 1 August 1996, the United States took the gold medal by defeating China 2-1 in the Womens' Final of the Summer Olympics before a crowd of 76,489 at Sanford Stadium in Athens, Georgia. At the time, it was largest crowd in history to watch a women's sporting event.

It was the first time that women's football had been included in the Olympics. Eight teams qualified and were divided into two groups. The United States and China were in the same group and played each other to a 0-0 draw on 25 July. They both won their matches against group members Sweden and Denmark to finish in the group's top two spots, with China in first place on goal differential.
In the knockout rounds, the United States beat Norway 2-1 (a.e.t.) and China defeated Brazil 3-2 to set up the rematch in the gold medal game.
Midfielder Shannon MacMillan scored first to put the US ahead in the 19th minute, but China equalized in the 32nd minute with a goal from midfielder Sun Wen. In the 68th minute, US forward Tiffeny Milbrett again put the US ahead, then gave way to midfielder Tiffany Roberts three minutes later as the US side protected its lead to the final whistle, claiming the first ever gold medal in Olympic women's football.