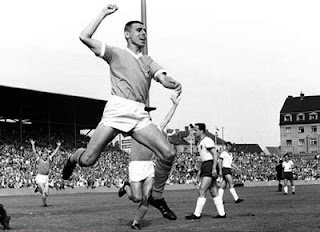 On 24 August 1963, Borussia Dortmund striker Friedhelm "Tino" Konietzka (pictured) scored the Bundesliga's first goal when he found the net in the first minute of Dortmund's season-opening match against Werder Bremen.

The 1963-64 season was the first season of the Bundesliga, which had been established the previous summer. Dortmund qualified for the new 16-team league as one of five clubs from the previous regional Oberliga West, while Werder qualified as one of three teams from the Oberliga Nord.

In that opening match, Konietzka added a second goal in the 90th minute, but Werder scored three in the interim to claim a 3-2 win. Dortmund were more successful on the season, however, finishing in fourth place while Werder ended up in the 10th position.
Posted by Brian Seal at 12:01 AM