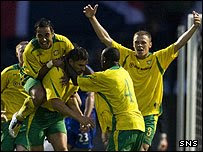 On 5 August 2008, FBK Kaunas beat Rangers 2-1 in the second leg of the Champions League qualifying match.

Rangers had finished as runners-up in the previous year's UEFA Cup and carried high expectations into Champions League qualification. They entered into the competition in the second round against Lithuanian champions Kaunas and were highly favored to advance. Kaunas, meanwhile, had started in the first round with a 7-2 aggregate win over Andorran side Santo Coloma.
Rangers and Kaunas had played to a 0-0 draw in the first leg in Glasgow the week before. In the second leg, Rangers took charge in the 33rd minute when midfielder Kevin Thomson calmly slotted the ball through the legs of Kaunas' Slovakian keeper Marian Kello. Even after a 30-yard freekick from Nerijus Radzius drew Kaunas level in the 43rd minute, Rangers seemed confident of advancing on away goals.
In the 87th minute, however, Rangers failed to handle a Kaunas corner kick and midfielder Linas Pilibaitas headed the ball in from close range to claim the 2-1 aggregate win for the Lithuanian side.
Although the loss triggered a flood of criticism of Rangers and manager Walter Smith, the loss may have been a gift in disguise, as it allowed the team to focus on their domestic duties and they won the Scottish Premier League title that season after a three-year drought.