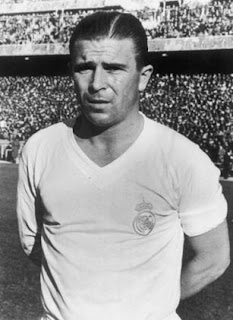 On 11 August 1958, 31-year-old Hungarian forward Ferenc Puskás signed for Real Madrid. At the time, he was one of the most famous footballers in the world, with a lengthy list of honors, including being the top goal scorer in Europe in 1948 and the World Player of the Year in 1953.


Nicknamed "the Galloping Major," Puskás had led his previous club, Honvéd, to five Hungarian League titles and had been instrumental in Hungary's gold medal performance in the 1952 Summer Olympics.


In 1956, he was in Europe with Honvéd for the European Cup when the Hungarian Revolution began in Budapest. Several Honvéd players, including Puskás, decided not to return to Hungary. Because of his refusal to return, UEFA banned him from playing for two years. He signed with Real Madrid when his ban expired.


He enjoyed continued success at Real, winning five consecutive La Liga titles from 1961 to 1965 and making five appearances in the European Cup Finals and winning three of them. The last was in 1966, after which Puskás retired from playing.


Puskás subsequently managed several different clubs from 1967 to 1992, including Panathinaikos, whom he guided to the European Cup Final in 1971. He passed away in November 2006 at the age of 79 and is buried under the dome of St. Stephen's Basilica in Budapest.
Posted by Brian Seal at 12:01 AM