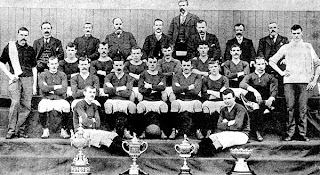 On 6 August 1875, a group of Irish-born football enthusiasts in Edinburgh's Cowgate neighborhood created Hibernians, named after the Roman word for Ireland. The club went on to play a significant role in the progress of Scottish football.
From the moment of its creation, the club had strong religious ties. Their first manager (and one of the founding members) was a priest, Canon Edward Hannon. Also, all players were required to be members of the Catholic Young Men's Society, an early sign of sectarianism in Scottish football that later came to a head in the Old Firm rivalry between Celtic and Rangers. In fact, when Celtic was formed in 1887, many of the first players were borrowed from Hibernians.
For reasons that have never been explained, Hibernians failed to attend the meeting at which the Scottish Football League was formed, and thus were not included in the nascent league. That failure made it difficult for the club to schedule matches and ultimately led to its near-demise in 1891, when it ceased operations. It reformed in 1892, however, as Hibernian F.C. The newly-named club joined the SFL Second Division in 1893 and was promoted to the First Division for the 1895-96 season.
The early 1900s were successful for Hibs, who won the Scottish Cup in 1902 and the league title in 1903, but began to decline in the 1920s as the Old Firm began to rise.
Hibs enjoyed a renaissance in the 1950s, when they were managed by Scottish coaching legend Jock Stein. They won the league in 1952 and finished second in 1950 and 1953 (both times to Rangers). In 1955, they became the first British team to play in the European Cup, making it to the semifinals of the inaugural tournament in 1955-56 before losing to Stade de Reims 3-0. Stein left after that season to manage Celtic, whom he transformed into a dominant side.
Hibs currently play in the Scottish Premier League, where they finished in sixth place in the 2008-09 season.
Posted by Brian Seal at 12:01 AM