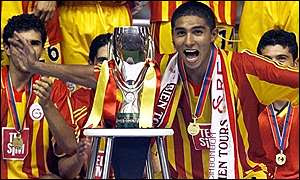 The Turkish side drew first blood with a penalty kick in the 41st minute, as Real defender Iván Campo was flagged for fouling left back Hakan Ünsal in the box and the Turkish side's new signing, Brazilian forward Mario Jardel, converted the spot kick. Real captain Raúl scored an equalizing penalty in the 79th minute after Galatasaray midfielder Suat Kaya was called for a handball.

The match went into extra time, where Jardel decided it by slotting the golden goal past Iker Casillas from eight meters away in the 103rd minute.