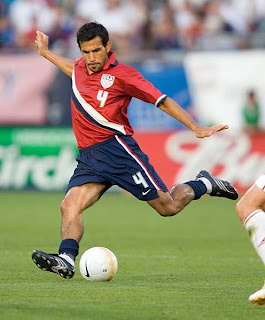 On 29 August 1976, future US international midfielder Pablo Mastroeni was born in Mendoza, Argentina.

At the age of 4, he moved with his parents to Phoenix, Arizona. Although his father had hoped that Mastroeni would someday play for his native Argentina, young Pablo decided at 9 years old that he wanted to play for the US.
He got his wish in 2001, when US manager Bruce Arena called him up for World Cup qualifiers against Honduras and Costa Rica. He earned his first cap on 7 June 2001 in a match against Ecuador and made his first start in the opening match of the 2002 World Cup as the US upset Portugal, 3-2.
Mastroeni has made 63 appearances for the United States, but is probably best known for receiving a 45th-minute red card in the 2006 World Cup after roughly tackling Italy's Andrea Pirlo.
He has spent his club career in the MLS, first playing for the Miami Fusion (1998-2001) and then the Colorado Rapids (2002-present).
Posted by Brian Seal at 12:01 AM