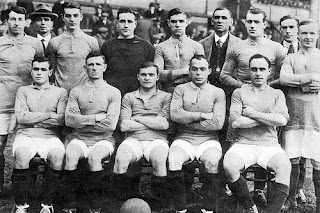 On 30 August 1919, English League football began its first season since 1915, when the League was suspended for World War I.

While many clubs fielded teams for regional competitions during that period, all Football League and FA Cup matches were cancelled for the duration of the war. When League play resumed on 30 August 1919, it picked up where it had left off, so that clubs who had been relegated or promoted in 1915 finally appeared in their new surroundings.
Both Derby County and Preston North End played their first League matches since achieving promotion at the end of the 1914-15 season by finishing first and second, respectively, in Division Two. Derby enjoyed their season debut with a 1-1 draw against Manchester United (whose 1919-20 squad is pictured above), while Preston suffered the top flight's most lopsided result of the day, a 4-0 beating at the hands of Blackburn.
Tottenham Hotspur, on the other hand, opened its season in the Second Division, relegated after finishing at the bottom of the First Division table in 1915. Their Division Two opener was a stellar 0-5 win away to Coventry City, which was the largest margin of victory that day in the second tier. The start was no fluke, as Spurs went on to win Division Two and earn promotion back to the top flight in 1920.
Posted by Brian Seal at 12:01 AM