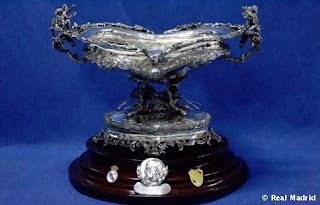 Founded in honor of former Real Madrid manager and President Santiago Bernabéu, who died over one year earlier on 2 June 1978, the Trofeo is a preseason mini-tournament originally contested by Real and three invited teams. In 1978, those teams were Bayern Munich, Ajax, and Milan.

Bayern quickly took an 0-2 lead with goals in the 2nd and 16th minutes. Real pulled one back in the 19th minute, but was unable to equalize and the match ended 1-2. Bayern advanced to the Final against Ajax, who had beaten Milan on penalties, and scored two late goals to win 2-0 and claim the first Santiago Bernabéu trophy.

In 1987, the Trofeo abandoned the four-team format and has since been played as a single match between Real and one other team.
Posted by Brian Seal at 12:01 AM