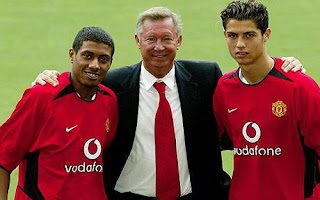 United acquired Ronaldo from Sporting C.P., whom he had joined on a youth contract in 1997 at the age of 12. He joined Sporting's senior team in 2001 at the age of 16 and made 31 appearances for them, scoring five goals.

United manager Alex Ferguson said that he had been tracking Ronaldo for at least nine months, but had been particularly impressed with Ronaldo's play in Sporting's 3-1 defeat of United in a friendly held in Lisbon the week before his signing. The winger had also drawn the attention of Real Madrid, Juventus, and Chelsea, sparking a bidding war that drove the transfer fee up to £12.24 million, making Ronaldo the most expensive teenage signing in Britain to that point.

As if the record signing fee didn't create enough pressure on Ronaldo, Ferguson added to it by giving him United's famous No. 7 shirt, previously worn by United legends such as George Best, Bryan Robson, Eric Cantona, and - most recently - David Beckham. Ronaldo rose to the challenge, however, and helped lead United to three consecutive Premier League titles (2007, 2008, 2009), one FA Cup trophy (2004), and one UEFA Champions League trophy (2008). He also claimed a number of individual honors, including the FIFA World Player of the Year in 2008.

In July 2009, Ronaldo moved to Real Madrid for a transfer fee of £80 million.

Kleberson, who was signed from Brazilian side Atlético Paranaense for £6.5 million, was less successful, making only 30 appearances for United before transferring to Turkish side Beşiktaş for £2.5 million.
Posted by Brian Seal at 12:01 AM