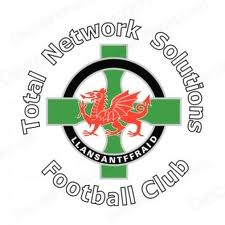 On 14 August 2003, UEFA ratified the merger of Total Network Solutions FC with neighboring Oswestry Town FC, a combination notable for the fact that the two teams were separated by the border between England and Wales.

In 2003, the club merged with Oswestry Town, who, despite being located in England, also played in the League of Wales. UEFA initially opposed the merger for combining clubs from different countries, but eventually consented. The merged club retained the Total Network Solutions name and colors, but used Oswestry's colors for its away kit.

In 2006, the club's sponsor was bought out by British Telecom, who ended the sponsorship. The club then changed its name to the New Saints of Oswestry Town & Llansantffraid F.C., or "The New Saints" for short.
Posted by Brian Seal at 12:01 AM