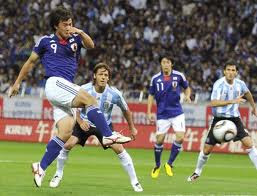 On 8 October 2010, Japan got their first win over Argentina, beating them 1-0 in a friendly. It was the seventh meeting between the two teams.

It was Japan's first match under their new manager, Alberto Zaccheroni, who had just come off a 6-month term with Juventus. His pre-Japan career also included spells with a number of other Italian clubs, including Udinese (1995-98), Milan (1998-2001), Lazio (2001-02), Inter (2003-04), and Torino (2006-07). Argentina, meanwhile, were playing their third match under interim manager Sergio Batista, who had replaced Diego Maradona after the 2010 World Cup. Argentina had won his two previous matches, over Ireland (1-0) and defending World Cup champions Spain (4-1).

The Albiceleste fielded a full-strength side for the match against Japan, played before a crowd of 60,000 at Saitama Stadium. But despite the presence of prolific scorers Lionel Messi, Carlos Tevez, and Diego Milito, it was Japan who struck first, going up 1-0 in the 19th minute with a goal from Shimizu S-Pulse winger Shinji Okazaki (pictured, left), who pounced on the ball after goalkeeper Sergio Romero failed to hold on to it.

Messi twice came close, but his 14th-minute and 30th-minute shots were stopped by goalkeeper Eiji Kawashima. He had another chance in the 75th minute, but fired the ball straight at Kawashima for an easy save.

Not content to sit on the lead, Japan attacked the Argentine goal and had several opportunities to extend the margin. But Okazaki's goal remained the only one of the day as Japan claimed the 1-0 victory.