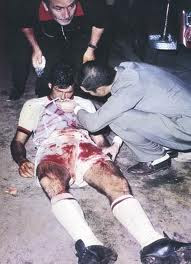 On 22 October 1969, AC Milan won their first Intercontinental Cup in a match that one paper described as "the culmination of all that is evil in international club soccer."

It was the second leg of the competition between European Cup champions Milan and Copa Libertadores winners Estudiantes. The Argentines faced an uphill battle, as the Intercontinental Cup had just moved away from a points system to an aggregate score model and the Italians had won the first leg 3-0 in Milan.

The return leg at La Bombenera became hostile even before the opening kick-off: Estudiantes players kicked balls at the visiting team during warm-ups and some of the 45,000 spectators reportedly dumped hot coffee on the Milan players as they took the pitch. But the situation grew worse in the 17th minute, as Milan striker Pierino Prati--who had scored a hat-trick in Milan's 4-1 win over Ajax in that year's European Cup--suffered a mild concussion and was briefly unconscious. He managed to play on until the 37th minute, when he was replaced by Giorgio Rognoni.

By that time, Milan had extended their aggregate lead to 4-0 with a 30th-minute goal from captain Gianni Rivera. It wasn't all good for Rivera, though, who was on the receiving end of a punch from Estudiantes goalkeeper Alberto Poletti. Poletti also delivered a kick to the face of Milan's Argentina-born French striker Nestor Combin (pictured), who suffered a broken nose and cheekbone thanks to an elbow from Estudiantes defender Ramón Aguirre Suárez. (Combin ended up spending the night in jail, charged with evading obligatory Argentinian military service, but eventually managed to convince the authorities that he had completed his service in France, where he was a citizen).

Estudiantes managed to score twice before the break (including a goal from Suárez), but were unable to close the gap and lost 4-2 on aggregate.