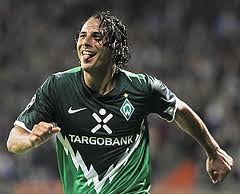 Pizarro moved to the Bundesliga in 1999 with Werder Bremen, then moved to Bayern Munich in 2001. Between the two, he scored 100 league goals before moving to Chelsea in 2007. His time in London was brief, however, as he returned to Werder Bremen on loan in 2008, then on a permanent transfer in 2009.

His second spell in Bremen started successfully, with the club winning the DFB-Pokal and reaching the UEFA Cup final in 2009, then finishing third in the league in 2010. But they struggled at the start of the 2010-11 season, winning only three of their first eight matches when they traveled to Mönchengladbach. At the time, Pizarro was tied with his former Bayern teammate Élber Giovane as the league's record foreign goalscorers with 133 each.

The match was no contest. After only 12 minutes, the visitors were up 0-2 with goals from Marko Marin (5') and Wesley (12'), then Aaron Hunt stretched the lead to 0-3 in the 51st minute. The hosts got a slight lift when Werder center back Per Mertesacker put the ball into his own net in the 67th minute, but Pizarro restored the margin with his record-setting strike in the 75th minute. It was a rare bright spot in the season for Werder, who finished in 13th place.

Pizarro still plays for Werder Bremen and has since added to his total--he now has a current tally of 145 Bundesliga goals.