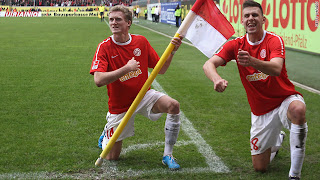 On 2 October 2010, Mainz joined an exclusive group by opening their season with seven straight league wins. Like the others, however, the streak ended at seven.

Bayern Munich were the first team to win their first seven Bundesliga matches back in 1995 and Kaiserslautern matched the feat in 2001. In the 2010-11 season, Mainz beat both of them en route to their own streak. It started in August with Stuttgart and included wins over Wolfsburg, Werder Bremen, and Cologne to extend the run to six.

Their seventh match came against Hoffenheim, who had beaten Mainz twice the previous season. But the hosts, who were sitting at the top of the table, wasted no time in taking the lead--striker Sami Allagui put them ahead in just the second minute. Hoffenheim striker Demba Ba equalized in the 41st minute, Ádám Szalai (pictured at right) restored the lead six minutes later. Hoffenheim midfielder Luiz Gustavo inadvertently extended the lead with a 59th-minute own goal and the two teams traded late strikes to end the match as a 4-2 Mainz victory.

Unfortunately for Mainz, they fell short of taking sole possession of a new record, falling to Hamburg 0-1 in their next match two weeks later.