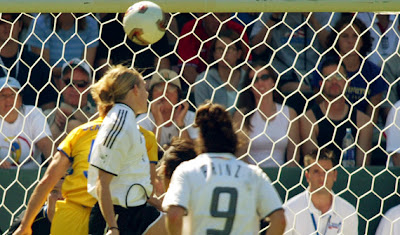 On 12 October 2003, Germany won their first Women's World Cup, beating Sweden 2-1 in the final with a golden goal from substitute Nia Künzer.

The final continued a growing rivalry between the two teams. Sweden won their first meeting in a major tournament, beating the Germans in the 1991 FIFA World Cup third-place match, then again in the group stage in 1995. But since then, it had been all Germany, who defeated Sweden twice in the final of the UEFA Women's European Championship (1995 and 2001), took them out in the Euro semifinals in 1997 and beat them in the first round in 2001. They also topped them in the group stage of the 2000 Summer Olympics.

In the 2003 World Cup Final, played before a crowd of 26,137 at the Home Depot Center in Carson, California, Sweden played a strong defensive game, shutting down a high-powered German attack that saw them breeze through the group stage with a goal differential of +11. Although the German side included forward Birgit Prinz, the tournament's leading scorer with seven goals, she was repeatedly denied by Swedish goalkeeper Caroline Jönsson.

Sweden took a surprising lead with a 41st-minute strike from forward Hanna Ljungberg, but the lead didn't last long as German striker Maren Meinert equalized in the 46th minute. That was the last score throughout the first 90 minutes, sending the match into extra time. There, defender-midfielder Künzer (pictured), who had come on in the 88th minute, scored a golden goal, beating Jönsson with a powerful headed ball that just cleared the keeper's outstretched hand.

Germany went on to repeat as champions in 2007. Since the 2003 final, they have beaten Sweden twice more in a major tournament, in the third-place match for the 2004 Olympics and in the quarterfinals of the 2008 Olympics.