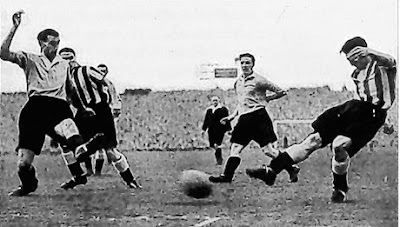 On 5 October 1946, Newcastle beat Newport County 13-0, setting a record margin for both teams.

The match, in the ninth week of the Second Division season, was the Newcastle debut of forward Len Shackleton, who had signed four days earlier from Bradford Park Avenue for the substantial fee of £13,000 (just £1,500 under the record at the time). Shackleton had scored 171 goals in 217 league appearances for Bradford and Newcastle were counting on him to provide a spark to their offense.

His first contribution to the scoreline, however, was not a goal, but an assist, as he set up center forward Charlie Wayman's opening goal after just five minutes. Wayman netted a first-half hat-trick, but was outdone by Shackleton, who had four by the break as Newcastle led 7-0. Wayman eventually got a fourth, while Shackleton finished with six en route to the final score of 13-0. It matched the scoreline set by Stockport County against Halifax in 1936 and remains a joint English league record (though far short of the 26-0 thrashing delivered to Hyde United by Preston North End in the first round of the FA Cup in October 1887).

Despite his scoring prowess, Shackleton, an inveterate prankster, ran afoul of Newcastle's management and the club sold him to Sunderland in February 1948 for the then-record fee of £20,500. He remained there until an ankle injury forced his retirement in 1957.
Posted by Brian Seal at 12:01 AM