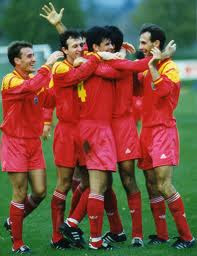 It was the first match in Macedonia's history, coming two years after both Macedonia and Slovenia declared independence from Yugoslavia. Slovenia got a slightly earlier football beginning, playing a total of four matches (a win, a loss, and two draws) before hosting the Macedonian team in Kranj.

But although Macedonia's national football program may have gotten off to a slow start, the team did not, going up 0-1 in the third minute with a goal from striker Zoran Boškovski. They doubled their lead with a 37th-minute penalty kick from forward Darko Pančev. Pančev was Macedonia's highest-profile player, having moved to Inter the previous year after a four-year tenure with Red Star Belgrade where he was Europe's top scorer in the 1990-91 season and won both the European Cup and Intercontinental Cup in 1991.

Another penalty kick followed from defender Čedomir Janevski (48'), then midfielder Dragan Kanatlarovski provided their final goal in the 51st minute. (Kanatlarovski went on to manage the team from 2003 to 2005).

The two sides met again for Macedonia's second match, with Macedonia again taking the honors, winning 2-0 in Skopje.
Posted by Brian Seal at 12:01 AM