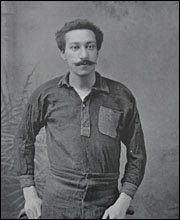 On 28 October 1865, Arthur Wharton was born in the city of Jamestown on the Gold Coast. He went on to become the world's first black professional footballer.

Technically, Wharton was of mixed race. His father, a minister, was half-Grenadian and half-Scottish, while his mother was part of an African royal family. He moved to England at the age of 19 to train for the ministry, but soon developed a passion for sport, including running, cricket, and football. (At 20, he set a world record in the 100-yard sprint.)

In 1885, he began his footballing career as an amateur goalkeeper for Darlington and moved to Preston North End the following year. In 1889, after a brief time away from football to focus on running, he returned to the sport, signing a professional contract with Rotherham Town. He later played for Sheffield United, where he became the first black player to appear in an English First Division match.

By the time he retired in 1902, he had also played for Stalybridge Rovers, Ashton North End, and Stockport County. After football, he spent time as a haulage hand, but continued to run and play cricket. Sadly, he died a pauper in 1930 and was buried in an unmarked grave. He eventually received a headstone in 1997, thanks to an anti-racism campaign led by the Football Unites, Racism Divides project.

In 2003, he received a posthumous induction into the English Football Hall of Fame in recognition of his status as a pioneer.
Posted by Brian Seal at 12:01 AM