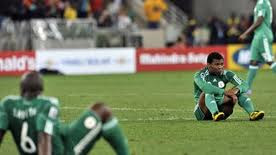 On 4 October 2010, just days before a scheduled African Cup of Nations qualifier, FIFA issued a worldwide ban against Nigeria, suspending them from participating in any football competitions. It was the second such ban received by the team in just over three months.

The suspension was the latest in a series of dramatic events that had hounded the team since their inglorious exit from the World Cup where, despite being tipped by many to make a strong run, they finished at the bottom of their first-round group and left having earned just a single point. Little more than a week after their last World Cup match, a 2-2 draw with South Korea, frustrated Nigerian president Goodluck Jonathan issued his own ban, forbidding the team from participating in any international competition for two years, though he soon reconsidered and rescinded the suspension six days later.

In August 2010, the Nigerian Football Federation (NFF) held elections despite an alleged court order instructing them to postpone the voting. Shortly afterward, the National Association of Nigerian Footballers filed suit against the new NFF officers and received a Lagos High Court ruling that the elections were null and void.

That latest event was the final straw for FIFA, whose rules prohibit government intervention in the affairs of its members. In announcing the ban, FIFA stated that "During the period of suspension, the NFF will not be able to be represented in any regional, continental or international competitions, including at club level, and also not in friendly matches."

Following the announcement, the NAFC pledged to drop their challenge against the NFF at an upcoming court hearing. In response, FIFA lifted the ban provisionally, allowing the Super eagles to play their qualifier on 10 October (they lost to Guinea, 1-0).
Posted by Brian Seal at 12:01 AM